England’s ‘pingdemic’ chaos is only getting worse: A record 1.5MILLION self-isolation alerts were sent last week, official data reveals amid mounting pressure on Boris Johnson to bring forward the scrapping of quarantine rules for fully-vaccinated

By Joe Davies For Mailonline

A record 1.5million people were asked to self-isolate to thwart the spread of coronavirus last week, official data revealed today as England’s ‘pingdemic’ chaos continues to rage on.

NHS figures show nearly 690,000 alerts were sent out by the NHS app last week — the most since the voluntary software was introduced. A further 536,000 people were reached by Test and Trace call handlers and ordered to quarantine at home, while 308,000 were told to self-isolate after testing positive for Covid.

The damning statistics come as Boris Johnson continues to face heavy criticism for refusing to ditch the isolation rules for another three weeks, despite lifting restrictions on ‘Freedom Day’.

Millions of workers haven’t been able to do their jobs because they’ve been told to isolate, leaving supermarket shelves empty, pubs and restaurants shut, and trains cancelled across the country.

One of the Government’s scientific advisers yesterday said the quarantine rules that have fuelled the pingdemic and caused ‘massive problems’ to the economy, schools and everyday life are unnecessary and should have been scrapped six months ago.

The comments made by Sir John Bell, regius professor of medicine at Oxford University, sparked renewed calls for ministers to accelerate reforms that will allow those fully vaccinated to avoid self-isolation from August 16.

Despite mounting pressure to bring forward the date, the Prime Minister has so far refused to budge. Yesterday Mr Johnson said the lifting of self-isolation rules was ‘nailed on’.

Communities Secretary Robert Jenrick today acknowledged the system is ‘frustrating’ but urged people to keep isolating if they are pinged. 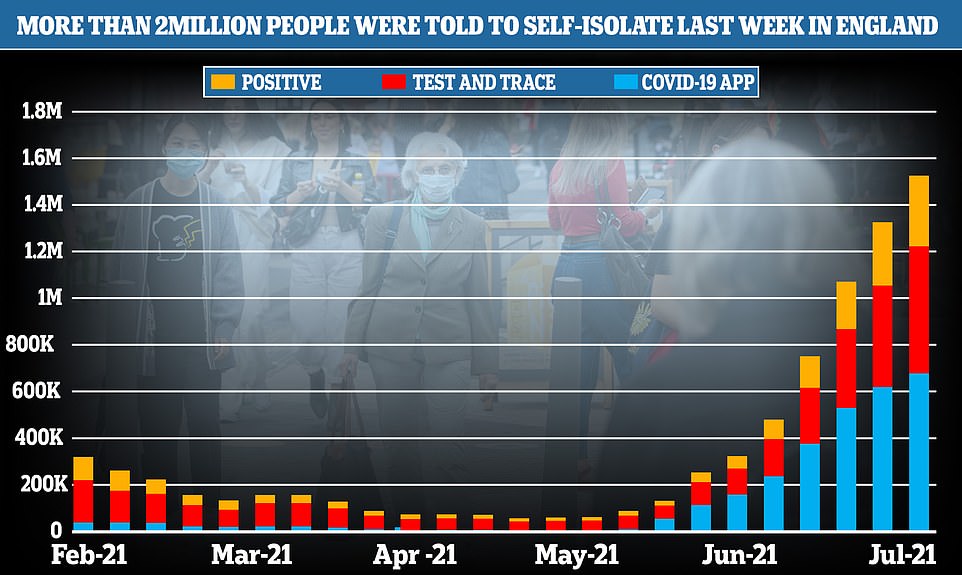 A record 1.5million people were asked to self-isolate by NHS Test and Trace last week, official data shows as England’s ‘pingdemic’ chaos continues to rage on 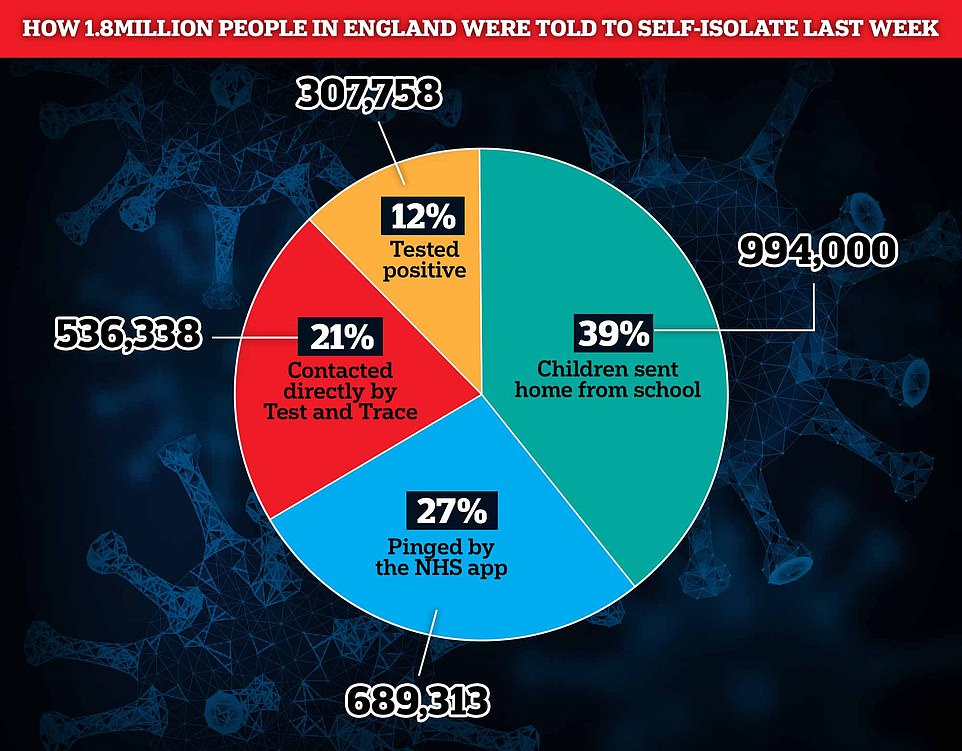 In total, when children sent home to isolate from school are included, there were more than 2.5million people told to quarantine last week — or four per cent of the entire population. However, some people pinged by the app would have also been contacted by Test and Trace. And some of the people who tested positive may have also been pinged or told to self-isolate 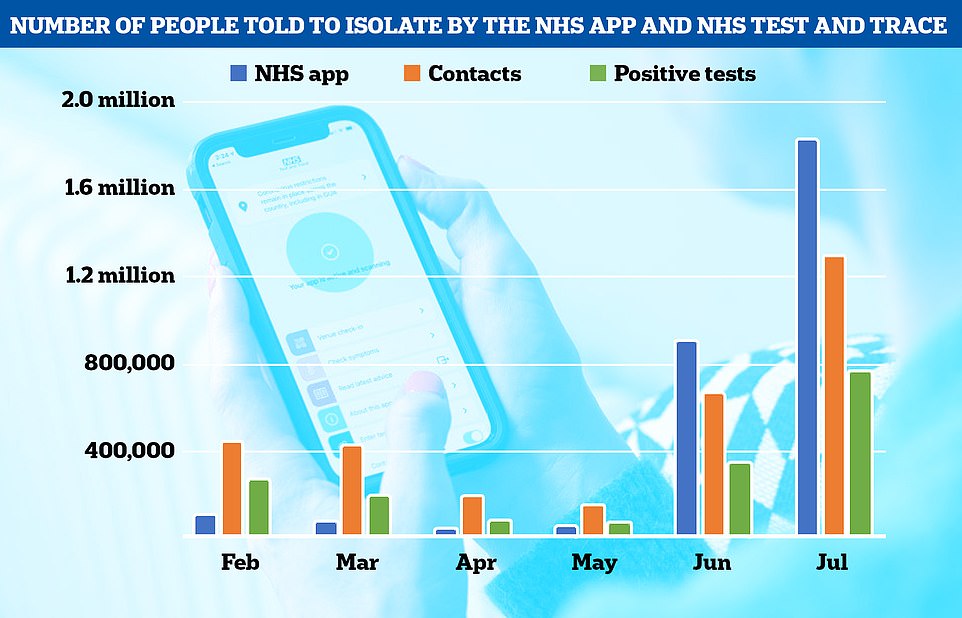 Graph shows: The number of people told to isolate by NHS Covid app (blue), contacts of someone testing positive reached by Test and Trace call handlers (orange) and people isolating because they tested positive (green) each month 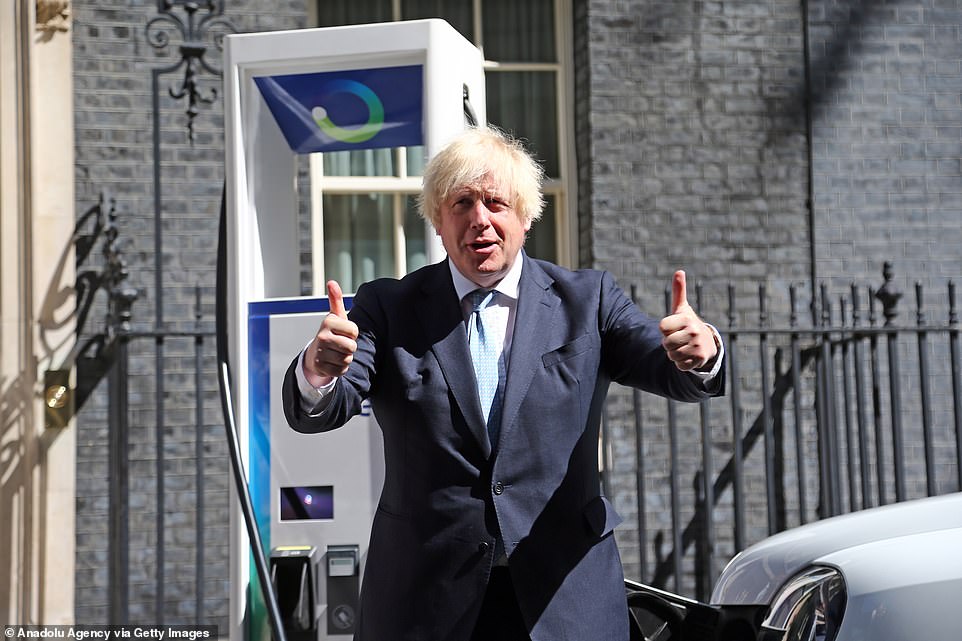 One of the Government’s top scientific advisers yesterday said he advised ministers to adopt a ‘test and release’ strategy as early as January, but Boris Johnson (pictured posing next to some electric cars outside 10 Downing Street this morning) has so far refused to budge on the August 16 date for scrapping self-isolation for the double-jabbed 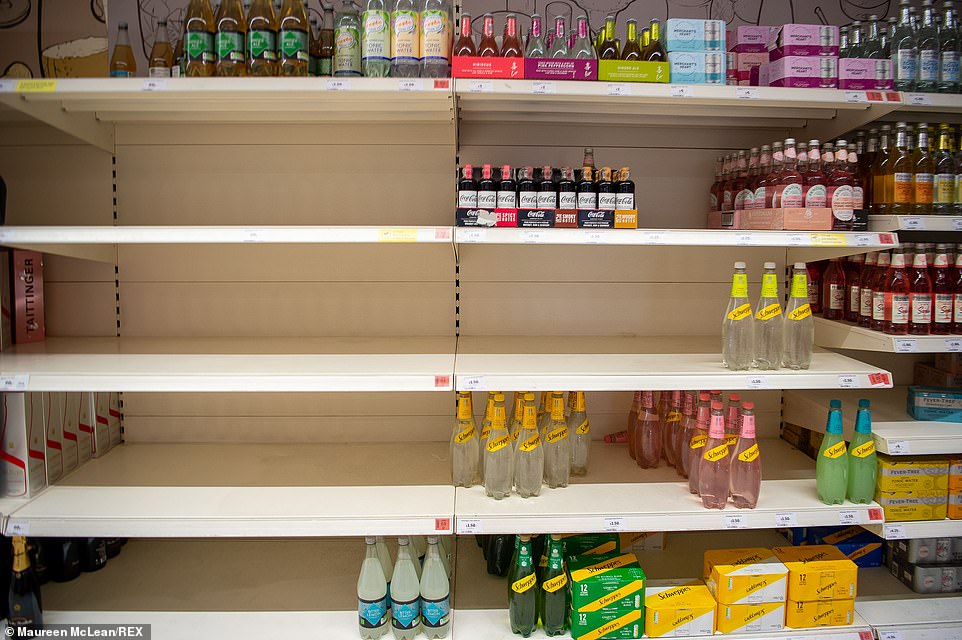 Some customers have been panic buying, leaving some gaps in the shelves (pictured, shelves in Sainsbury’s in Taplow, Buckinghamshire). There are some supply chain issues in general with supermarkets due to HGV lorry driver shortages because of the ‘pingdemic’ 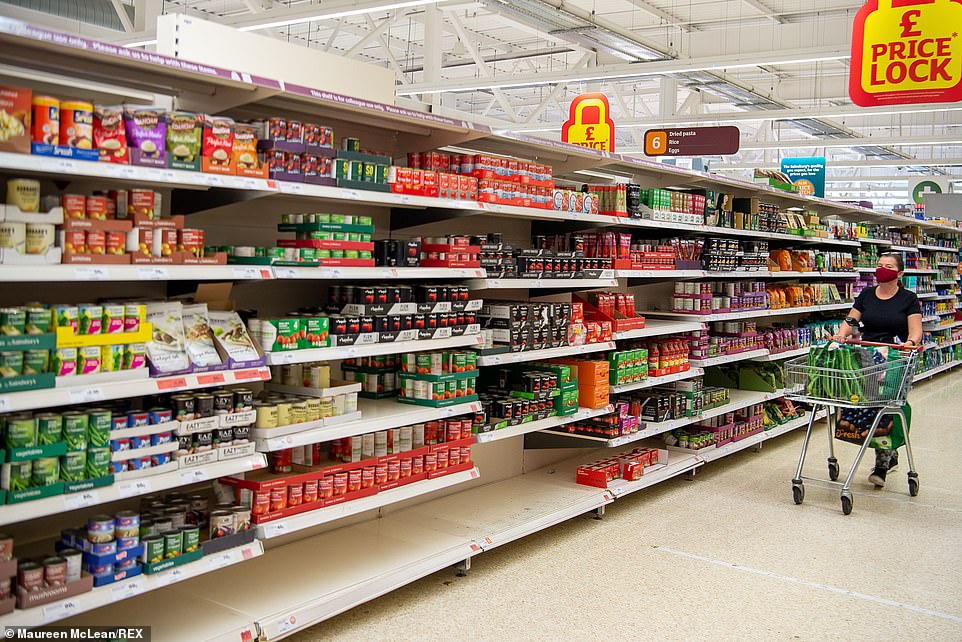 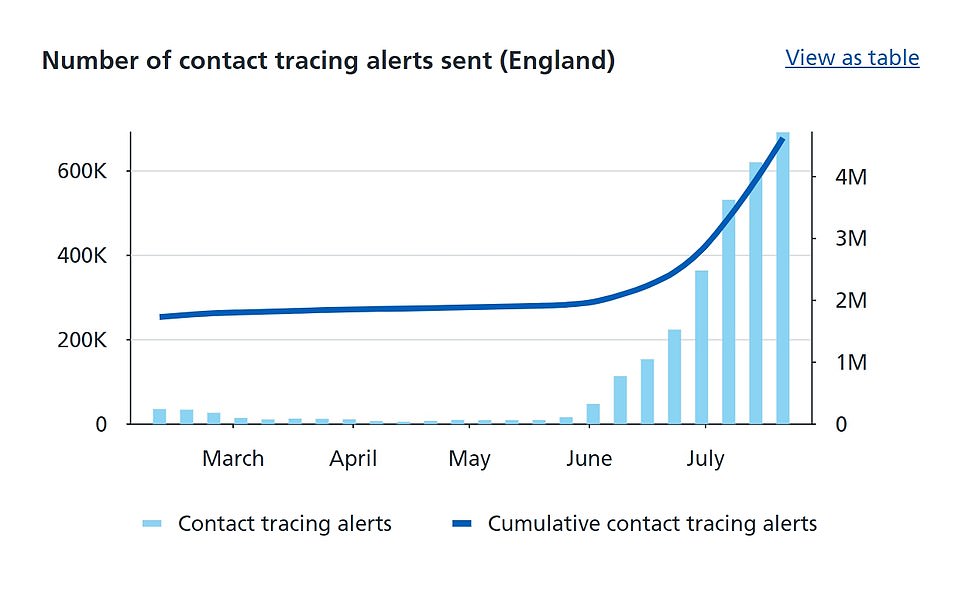 NHS figures show nearly 690,000 alerts were given out by the app last week, the highest number since it was introduced 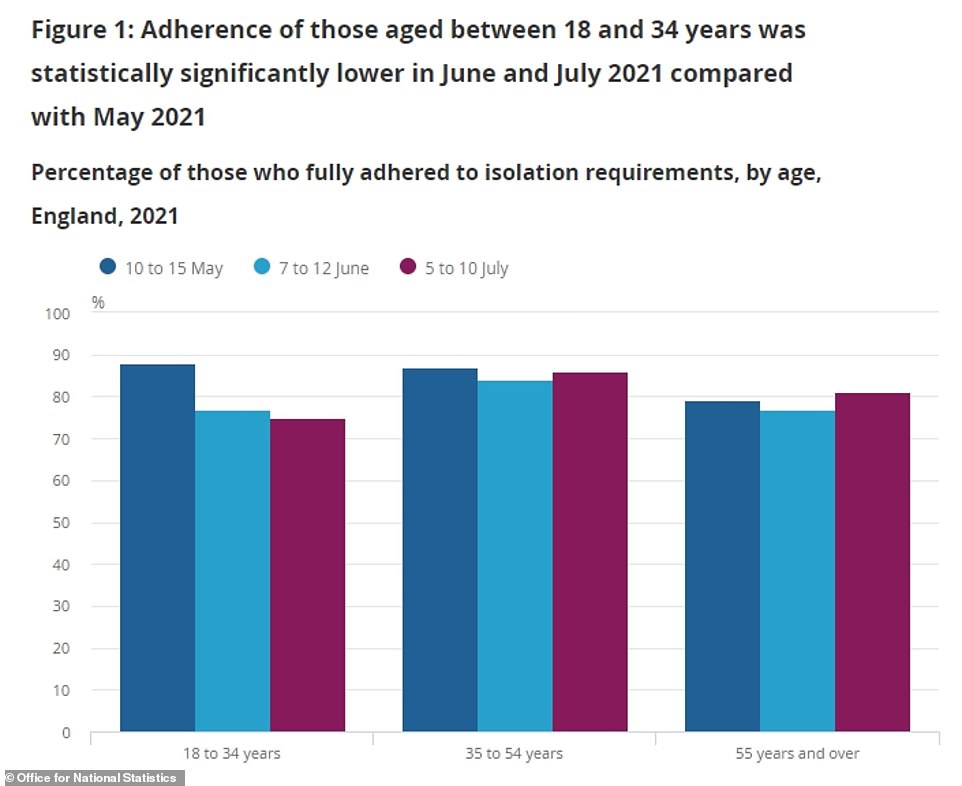 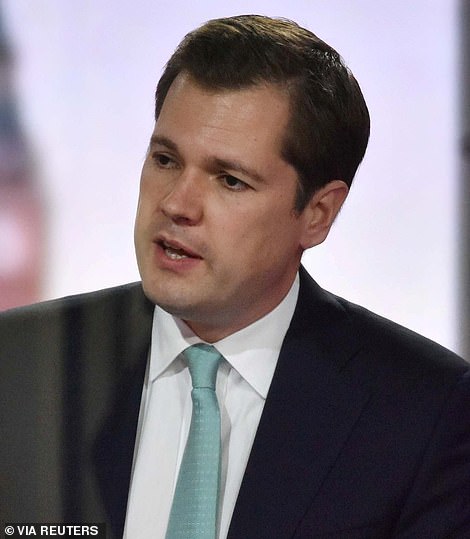 The latest NHS figures on alerts from the app, for the week to July 21, are an 11 per cent rise on the previous record high of 619,733 the week before.

The Test and Trace data is not a record-high, with the number of positive cases breaching 390,000 during the darkest spell of the second wave in January.

During the same week, more than 680,000 people were reached by call handlers and told to self-isolate.

But NHS bosses only began publishing figures on usage of the app in February, meaning today’s overall toll is the most since comparable records began.

However, the 1.5million figure only refers to the amount of alerts — not people.

A single person may be identified by the app and call handlers before going on to test positive themselves — or be asked to isolate multiple times in the same month.

This week the Government said it was expanding its daily contact testing for front-line sectors who are exempt from isolation.

A total of 2,000 sites across the country are available for people working in prisons, waste collection, defence, the food industry, transport, Border Force and police and fire services.

Daily negative test results will enable eligible workers who have been alerted by the NHS Covid app or called by NHS Test and Trace as coronavirus contacts to continue working.

A quarter of infected 18 to 34 year olds confessed to defying strict quarantine rules one week before England’s lockdown was loosened in July.

For comparison, the figure was just half of that in May — before pubs were allowed to reopen again.

But rates have barely changed for older adults, the same statistics showed.

Office for National Statistics (ONS) polling data showed adherence to isolation rules dropped across the board between May and July.

The figures, based on a survey of nearly 1,000 adults, come before the ‘pingdemic’ truly took off.

The next release, which will reveal how behaviour has changed following Freedom Day and the self-isolation chaos, isn’t due until the end of August.

‘Though we have seen a drop from May to July.

‘Self-isolation can have a negative impact on well-being and finances.

‘Nearly one third of people reported they lost income as a result of adherence and four in ten said self-isolation had a negative impact on their well-being and mental health.

‘With restrictions having relaxed further, it is important we continue to monitor the behaviour of those required to self-isolate.’

It comes as a survey published today suggested one in four young adults who test positive no longer follow the rules for self-isolating.

Office for National Statistics data shows adherence to isolation rules in people in people aged 18 to 34 who tested positive for Covid were consistently dropping in the three months leading up to July.

A survey of 936 adults between July 5 and 10 showed significantly more people aged 18 to 34 ignored the order to stay at home despite being infected with the virus than any other age group.

People who test positive for Covid must self-isolate for 10 days under Government rules. If symptoms persist they are encouraged to keep isolating longer.

The Communities Secretary urged people to continue following the rules and isolate if they are pinged.

Mr Jenrick told the BBC: ‘I appreciate that it is a significant number of people and it can be frustrating but the app is doing what we asked of it.

‘It is helping us to trace those people who have come into contact with people who’ve tested positive.

‘We still ask people, if they are pinged, to take the steps that they’re required to do and to self-isolate.’

He said there ‘isn’t very long to go’ until August 16 when all fully vaccinated contacts who test negative can avoid isolation.

He added: ‘The Government has also set out slightly different arrangements for certain critical workers such as those working within the emergency services and within critical infrastructure such as the food industry, to help us through the remaining two or three weeks before those new rules come into place.’

But critics have slammed the Government’s refusal to bring the ‘arbitrary’ date forward.

Matthew Lesh, head of research at the Adam Smith Institute, told MailOnline: ‘The pingdemic is wreaking havoc for thousands of businesses and millions of people. It has led to empty supermarket shelves, bins not being picked up and cancelled trains.

Read More:  Can i eat egg yolks on keto diet

‘The Government should adopt a risk-based approach. People who are fully vaccinated should immediately be allowed to exit isolation and instead undertake a daily testing regiment. This would ensure the identification of cases without huge economic burdens and crippling social isolation.

‘The Government’s arbitrary end date, August 16, was set before cases started declining based on the assumption of a later peak. There’s now zero reason to wait any longer.’

The recent surge in cases across England has led to millions of people being told to stay at home, either through the NHS app or Test and Trace.

Supermarket shelves have been left empty and trains cancelled because of a lack of staff.

Alan Thomas, UK chief executive at Simply Business — which provides insurance to small business — said: ‘The pingdemic is proving another obstacle for small businesses in their recovery from the impact of Covid.

‘The number of staff — and indeed self-employed people — in isolation is a major issue across every industry, and up and down the country we’re seeing businesses temporarily close due to record levels of self-isolation.

‘Freedom Day was supposed to be a positive milestone for the self-employed — with businesses finally able to operate at full capacity, or even open for the first time.

‘But many are now finding themselves shutting up shop once again.’

Tesco is offering a £1,000 joining bonus to lorry drivers who join the company before the end of September because of staffing pressures. 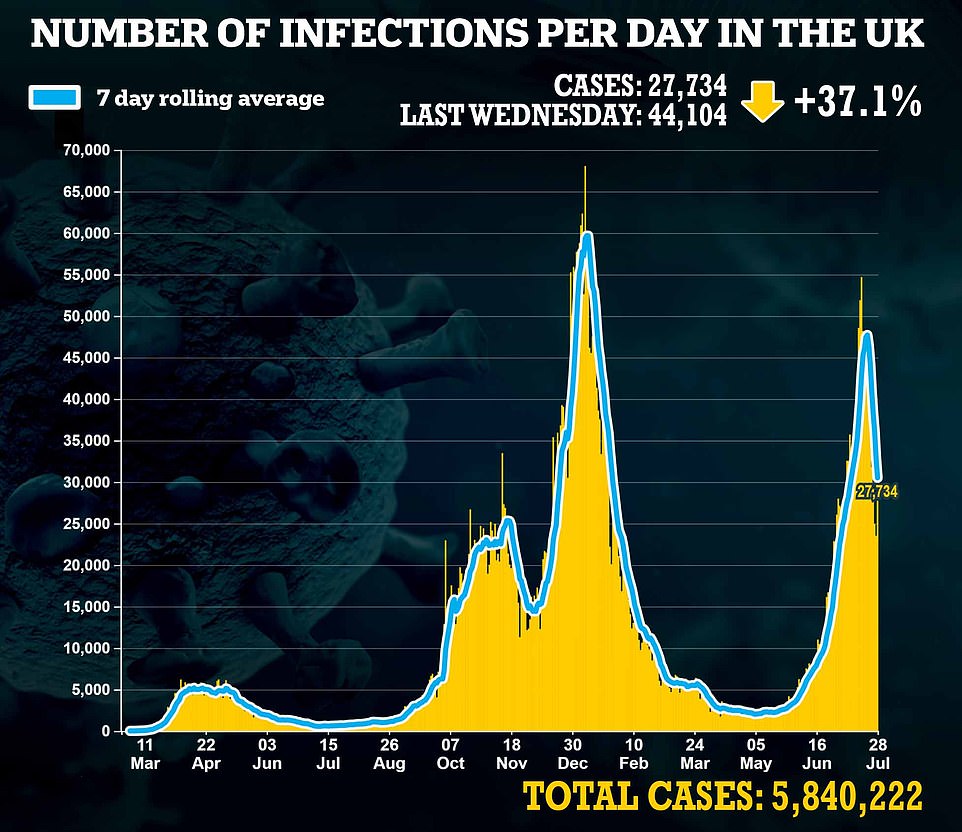 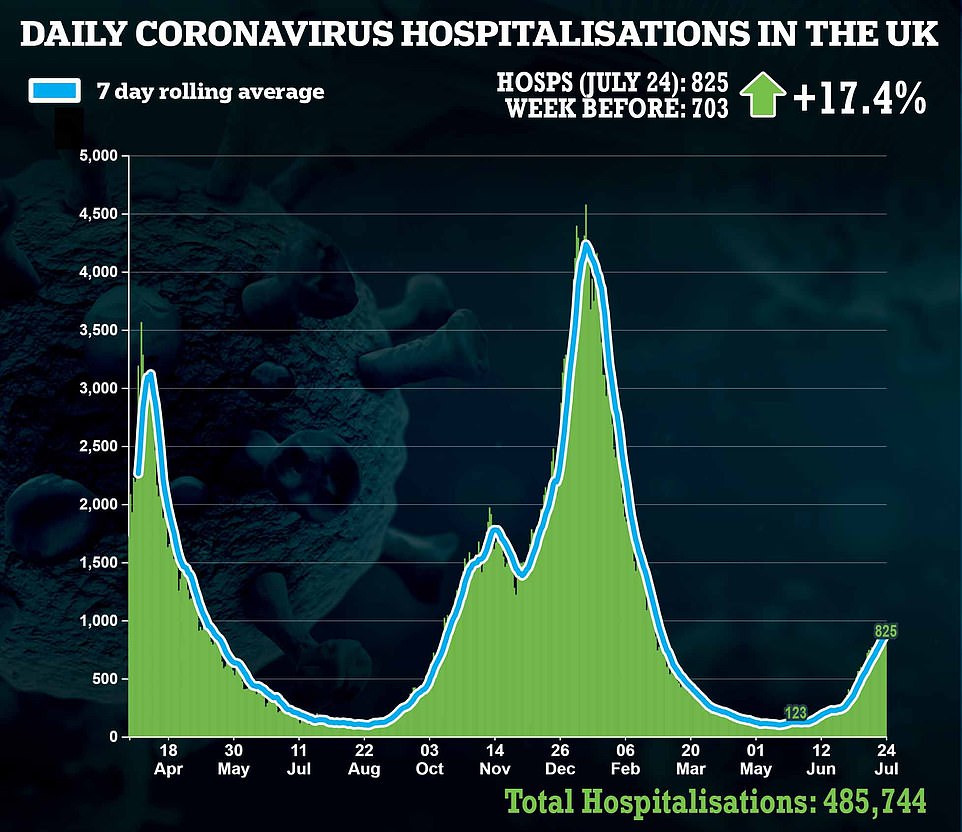 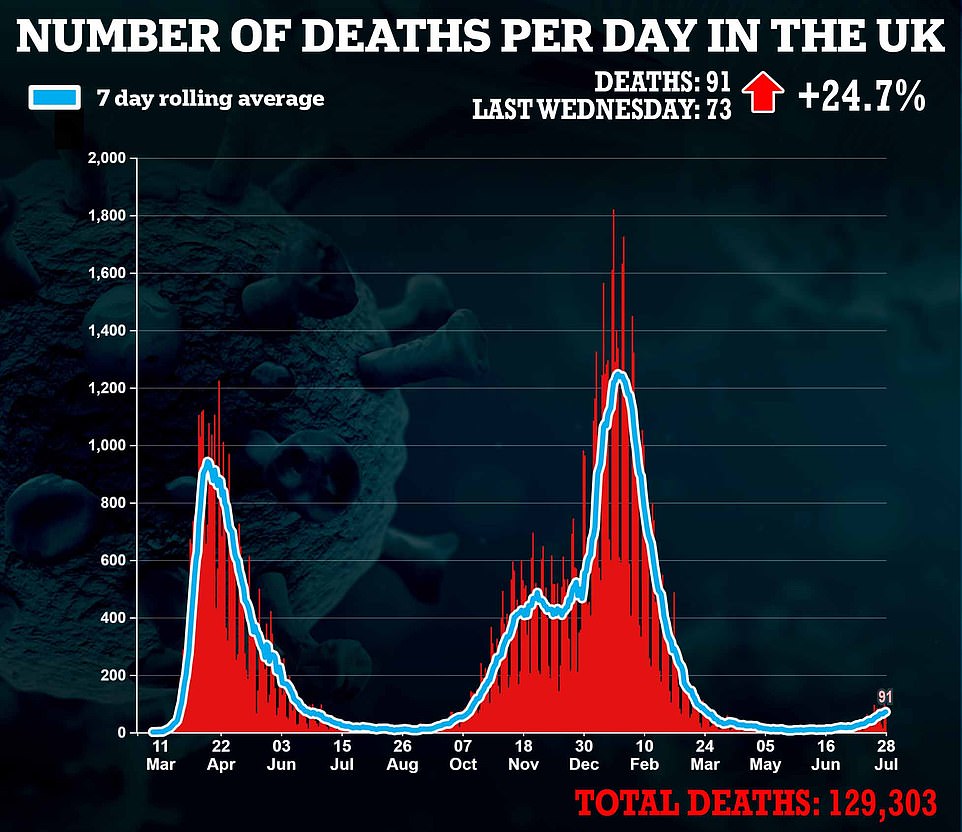 The payment, which applies to new starters who join from July 14 until September 30, appears on various advertisements for HGV driver roles on the food retailer’s website.

Potential candidates are told that the role offers the opportunity to be ‘an ambassador on our roads’ where ‘you’ll play a vital role for our customers and communities, representing Tesco on the highways and byways of the UK’.

The time-limited offer comes after supermarkets had to reassure customers last week that there was no need to panic buy following pictures of half-empty shelves and reports of temporary shortages.

A ‘perfect storm’ of aggravating factors was blamed for the situation, including self-isolating workers and prior staff shortages.

Meanwhile, the Road Haulage Association (RHA) previously said it believes there is a shortfall of about 60,000 haulage drivers in the UK after around 30,000 HGV driving tests did not take place last year due to the coronavirus pandemic.

Hauliers blamed the shortage on a large proportion of drivers being foreign nationals from European countries who had returned to the EU, combined with truck drivers not being included on the Government’s list of skilled labour, leaving new arrivals needing immigration paperwork.

Tesco previously assured shoppers it had plenty of food and all grocers urged customers to shop as normal.